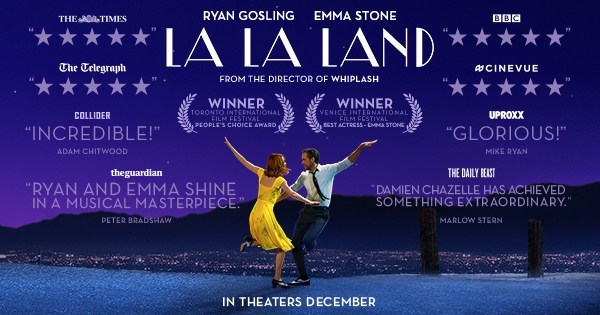 La La Land, or The power of real endings

I will be clear from the start: yes, I am one of those people who really loved La La Land.

I found it a very compelling movie for many reasons: it has great performances from all actors, especially Emma Stone and Ryan Gosling, the two artists portraying the main characters; it tells a soulful story of struggles, failures, and achievements that anybody could relate to, and I did; it is beautifully shot and orchestrated with passion and attention by Damien Chazelle, the young director whose previous effort, 2014's Whiplash, had hit me like a kick in the face. And the music, the songs, the colors of LA, the jazz atmosphere. I bought in all of it. Since I watched the film in a theater a few weeks ago, there hasn't been a day without one of the songs popping up in my mind. Maybe it's because the soundtrack is on constant repeat on my Spotify...

All this said, I wanted to focus on my favorite part of the movie: the ending. Given that not everybody has seen it, yet:

La La Land ends in the most realistically deceiving way, with a not-fully-happy ending. Emma Stone's Mia decides to follow her dreams and go to Paris for her chance to break out in the movie industry, while Ryan Gosling's Sebastian stays in Los Angeles to fulfill his own desire to own a jazz club. Inevitably, distance decides for them, the couple don't end up together, and Mia marries and has a child with another man.

This makes an unusual ending for a Hollywood movie, especially for a romantic comedy musical, where everybody would expect the two main characters to spend the rest of their lives together. But guess what? That's not how life goes. Nothing is perfect (ok, not many things are), nobody gets everything in the end, and we all have to make choices. Our choices not only shape our life and our regretful memories, but they also influence other people's existences, whether we want it or not.

As someone who looks for real stories and emotions in films, and aims at stuffing my writing with authentic fiction, I couldn't ask for more.

I will be honest till the end: in the theater many people cheered and clapped at the end of the first scene of the film, the "people stuck in LA highway traffic start to dance and sing, and it's magnificent and exhilarating" scene, and I was obviously among them #NoShame.