Editing, or The Taming Of The Shrew

There is a moment, when a writer finishes the first draft of her new novel, when she feels good. Feeling good is a very rare emotion for a writer, considering how we are always scrambling to chase inspiration, find the words to materialize it, then go out again hunting for more inspiration, and maybe also handle a daily job and a life. But closing that “Novel – First Draft – version 0.57.whatever” file, knowing that next iteration will be named “Novel – Second Draft – version 0.1.whatever”, always comes with a satisfied grin on a writer’s face. Too bad the smile and the feel-good vibe only last for one moment, as the following phase starts right away.

"play horror movie music, with woman screaming in the background"

There, I said it.

Editing is extremely hard. It’s like recognizing that your child is probably not the smartest, most amazing human being the world has ever seen, sure to become President one day; rather he’s just a six-month old who for now laughs with strangers on the subway and loves to put mashed carrots in his nose.

Anyway, editing requires a writer to separate herself from the pride she has in her work, and the memory of the sweat and blood that built that first draft, to come up with a second draft that sometimes has nothing in common with the first version. Editing involves killing off characters the writer liked, and some she loved; increasing screen time of actors she didn’t particularly enjoy, the difficult ones who always ask for a special treatment and a private room; catching the plot before it turns left instead of right; being like a god who can always see the past, the present, the future, and all verb tenses, and bend them to her will.

Not a piece of cake.


I’m now editing my new novel – what? You had guessed it already? Wow, good job.

In my mind the process has two steps: macro-editing and micro-editing.

Micro-editing, what most people call line editing, which is probably a way better name, is the writing equivalent of picking fleas. The writer has to go hair by hair, word by word, looking for lice, nits, dead skin, repeated words, strange sentences, out of sync verbs, wrong character names (it happens), typos. It’s work that consumes a certain part of one’s brain, forcing it to remain laser focused on microscopic details for long hours. It probably ends up blinding the writer, and it’s never completely error-free. I’ve done micro-editing for all my novels and short stories, with some solid external help, and I can say that, as tedious as it is, I could always see the light at the end of the tunnel. Pale and quivering at times, but always there.

Macro-editing is another animal. It as to come before its micro brother, since macro-editing can reshape the whole story and its protagonist. It should be called rewriting, if we writers were honest with ourselves. When a writer is macro-editing, she needs to take a look at her novel from the top of a hundred-floor skyscraper: did I choose the best protagonist for this story? Does the beginning set up the hero’s journey? Does the second act keep the reader captivated? Does the closure set everybody on their whistling walk towards sunset? Then the writer needs to walk down a floor, and ask herself slightly more detailed questions: did I choose the best villain for this story? Did I design the most interesting interactions between the hero and the villain? Did I pick the most exciting climax for the characters’ arcs? Then the writer will descend another flight of stairs, down to the 98th floor: does the inciting incident fit with my protagonist and the story I’m telling? Are the progressive complications building up in the second act to keep the tension high? Is the ending both inevitable and unexpected? All the way down to street level. You get the point.

This is the first time I macro-edit a novel.

For one simple reason: for my first two novels, ALL THE PEOPLE and AFRICA, I had gone through a very thorough pre-structuring exercise, describing events, feelings and interactions down to the chapter level. This had landed me already macro-edited first drafts. Don’t get me wrong: considering all the thinking, and notes taking, and chapter content drafting, the cumulated effort was probably the same. For my new novel I took a different approach: I just started to write, day after day, month after month. I wrote thousands of words that all together created a good first draft: there was a strong charming protagonist, a couple of well-designed side characters, a villain, and a plot that got ignited, somehow grew, and then got to a conclusion.

But it was not a novel.

The first time I re-read it I found it boring, a walk from point A to point B rather than a beautiful hike in the forest, with wild animals and blue skies.

I grabbed Robert McKee’s “Story” from my bookshelf, I opened it on page 1, and I put it back only when I reached page 490 (or so). I took a lot of notes while devouring the book, and when I finished it I knew what I had to do.

I created an excel spreadsheet that I called, you probably guessed it, “Structure”, and I wrote down the topics I needed to think through: main plot events, inner conflict, personal conflict, extra-personal conflict, subplot A, subplot B, subplot C, and a few more novel-specific items. I added time as a general column header and I created an Act 1 column, an Act 2, and an Act 3. I now had a matrix, of topics by act. 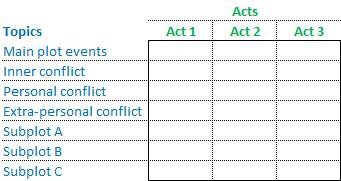 I went through a second re-read of my first draft, to place all the already existing components across the cells of my matrix; I soon realized I needed more time steps, so I divided my acts in subacts.

When I was done, it became easy to see where the gaps were, why my first draft was a unnecessary non-novel: conflicts were not clear; the inner conflict had too many highs and lows, without a proper arc; some essential secondary characters were not relevant enough.

I then spent many hours filling in those gaps in the matrix, thinking about how I could solve those issues and bring my work to the next level.

Once the structure had been finalized, I created a second spreadsheet in the same file, that I named “Chapter structure”. I replaced the subacts with chapter columns, and I assigned all the notes I had so far into each cell of the new “topic by chapter” matrix.

I now had a very detailed structure of my wannabe novel, but how to transform the skeleton into a working body?

I surgically placed the structure into my first draft, bone by bone.

I grabbed my manuscript for the third time (you would think at this point I knew it by heart…), and I re-partitioned it following the new chapter structure, moving around scenes and paragraphs. I added all my notes from the “Chapter Structure” spreadsheet, specifying what needed to happen across all topics, across all chapters. Once I was finished, some chapters had just one or two comments, “Add a scene with character X”, but other chapters in the second half of the book had ten or twenty notes: in those chapters all topics, all elements of my novel had to be completely revamped.

At this point I renamed my file Second Draft, and I somehow found the energy to keep pushing forward.

Once again my eyes were on those words, Chapter One, and I started to re-read my comments and rewrite or correct accordingly. I power-walked through the easy chapters, the ones with not much to do, and I even took the luxury to run some micro-editing on them, because why not. I got stuck for hours on some chapters I had to write from scratch, because some pieces were simply missing.

The closer I’m getting to the end, the more complicated it becomes, as the first draft is sometimes quite far from what I want the second draft to be.

Oh yes, you got that right: I’m not done yet. So why am I writing this article now? Because today I’m in a good mood. I completed about 78% of my second draft (it seems a random number, but when you will read the finished novel you will understand), and this is an achievement I want to honor. This is my celebration, one that hopefully brings some optimism to other writers who struggle through their second drafts. And after this ordeal, micro-editing will look like a fun little activity.

How will the story of my editing end? I guess we’ll see.